Excavator is an earth-moving machine that uses a bucket to excavate materials above or below the bearing surface and load it into a transport vehicle or unload it to a stockyard.

The transmission mechanism transmits the power of the engine to the hydraulic motor, hydraulic cylinder and other actuators through the hydraulic pump, and pushes the working device to move, thereby completing various operations.

According to different sizes, excavators can be divided into large excavators, medium excavators and small excavators.

According to different walking modes, excavators can be divided into crawler excavators and wheeled excavators.

The backhoe is the most common we’ve seen, a back-down, forced cut. It can be used for excavation below the shutdown working surface. The basic operation methods are: ditch end excavation, ditch side excavation, straight line excavation, curve excavation, maintaining a certain angle excavation, ultra-deep trench excavation and trench slope excavation. 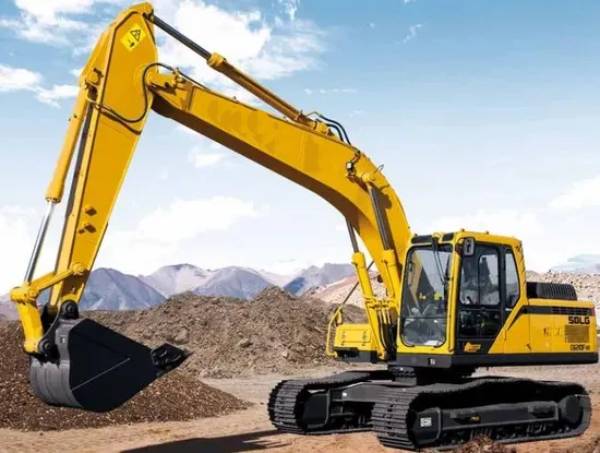 The shovel action form of a front shovel excavator. It is characterized by “forward and upward, forced soil cutting”. The front shovel has a large digging force and can excavate the soil above the stop surface. It is suitable for excavating dry foundation pits with a height of more than 2m, but up and down ramps must be set up. The bucket of the front shovel is larger than that of the backhoe excavator of the same equivalent, and it can excavate the first to third types of soil with a moisture content of not more than 27%, and cooperate with the dump truck to complete the entire excavation and transportation operation, and can also excavate Large dry foundation pits and mounds, etc. The excavation method of the front shovel is based on the difference between the excavation route and the relative position of the transport vehicle. There are two ways of digging and unloading: forward digging, side unloading; forward digging, reverse To unload soil.

Draglines are also called draglines. The characteristics of its excavation are: “backward and downward, cutting the soil under its own weight”. It is suitable for excavation of Class I and II soils below the stop surface. When working, the bucket is thrown out by inertial force, and the digging distance is relatively large, and the digging radius and digging depth are large, but it is not as flexible and accurate as the backhoe. Especially suitable for excavating large and deep foundation pits or underwater excavation.

Grab excavator is also called grab excavator. The characteristics of its excavation are: “straight up and down, cutting the soil under its own weight”. It is suitable for excavation of Class I and II soils below the stop surface, and is often used for excavation of foundation pits and caissons in soft soil areas. It is especially suitable for digging deep and narrow foundation pits, dredging old channels, digging up silt in water, etc., or for loading loose materials such as gravel and slag. There are two types of excavation: trench side excavation and positioning excavation. If the grab is made into a grid, it can also be used for loading ore blocks, wood chips, wood, etc. in the log yard.

Jiangsu Xingzhi Technology Co.,ltd provide Excavator Simulators.The Excavator Simulators are comprehensive training solution that provides an efficient way to learn and practice machine operation skills.The trainees could be trained in a targeted manner to operate various excavator types effectively in wide range of scenarios and environment.Through repetitious practice and the adequate preparation for the operation on the real machine,so as to reduce the repetitive errors and the accident rate of the potential dangerous operation.